BANGKOK, Thailand — Patriotism prevailed over the scorching hot weather on Sunday after an overwhelming number of Filipinos came out to participate in the early celebration of the 117th Anniversary of the Proclamation of Philippine Independence held at the Philippine Embassy compound in Bangkok. The celebration on Sunday was four days earlier than the official date of the Philippine Independence Day which is every 12th of June.

Over a thousand people including embassy officials, businessmen, overseas Filipino workers (OFW) and foreign nationals gathered together to commemorate the nation’s sovereignty. The celebration was organized by the Filipino Community Organizing Committee (FCOC) in cooperation with the Philippine Embassy. The organizers adopted the setup of a barrio fiesta, an annual festivity in a locality which showcases Filipino culture. The festivity was highlighted with colorful decorations, music, fellowship and merrymaking, foods, lots of activities and a mass celebration. 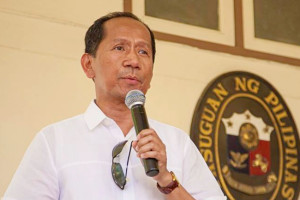 The program kicked off with a flag raising ceremony led by Consul General Edgar Badajos, chargé d’affaires and the embassy’s top diplomat. The celebration wouldn’t be complete without hearing a thanksgiving mass officiated by Rev. Fr. Gerry delos Reyes. The opening ceremony included messages from the Consul General himself, other embassy officials and letters from the PHL President, Vice President and some Secretaries.

The theme for this year’s celebration, “Independence 2015: Triumphs through Reforms, within the Nation’s Reach” was expounded in the messages sent by the President Benigno Aquino III through a letter which was read by the General Consul reminding the Filipino community of the courage, selflessness, grit, resolve, and passion of the country’s forefathers that won liberty and marked our identity as a people representing the Filipinos as a whole. He also stressed that we earned our democracy through the valiant sacrifices of our predecessors, and a relentless pursuit of peace, development and solidarity.

Other messages from Vice President Jejomar C. Binay, Department of Foreign Affairs Secretary Albert F. Del Rosario and Department of Labor Secretary Rosalinda Dimapilis-Baldoz were also read by embassy officials. They all reiterated that we should be proud of the freedom we are enjoying and that better reforms are coming for the Philippines.

For his part, Badajos challenged the Filipino community to renew their covenant and partnership to the Philippine government by helping the country to give the next generation what he calls a life that is free and democratic. He also thanked everyone for coming out despite the very hot weather.

The whole-day celebration was lighter in the afternoon when Filipino artists mostly consist of teachers performed and brought laughter to the audience. Different games and cultural presentations were participated in by various guests and performers like Bangkok Hilarious artist and Filipino stand-up comedian based in Bangkok Ryan Mapacpac who brought the house down with his amusing punchlines. 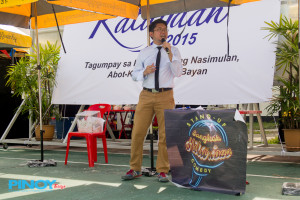 The most awaited part of the event was the performance of singer-comedian Ate Reg who flew all the way from the Philippines to celebrate with Filipinos in Bangkok. Aside from her wit and humor that made everyone chuckle, Ate Reg also rendered songs and led out in some games.

Raffle prizes at the end of the program usually hold the guests to stay. And truly, those who remained till the end of the program were lucky enough to get a number of prizes such as round-trip tickets from Cebu Pacific airlines, and some gadgets from Western Union. Other minor prizes include customized t-shirts, grocery items, and gift cheques. The celebration continued with singing and dancing until 8:00 in the evening.