Paul Nobles, a foreign teacher in Thailand, posted on June 30th in Thailand Foreign Teachers Association, a Facebook group dedicated for foreign teachers in the Kingdom, an information telling readers that Thai Immigration officials came to his school and inspected teachers’ work permits and passports.

The officials, according to him, also took photos of the class while teachers are doing their job for the day. They were also asked to show their passports and work permits for the photo op along with the immigration officer. No one in the 28 foreign teachers in his school got in trouble, he said, as everyone is working legally and with legal documents on hand.

He also reminded foreign teachers alike to always carry required working documents such as passport and work permit to avoid problems even if one is a legal foreign worker in the Kingdom.

“Thai Immigration officials visited our school today, inspected teacher’s work permits and passports. Took photos of some teaching in their class, and photos of us holding our work permits and passports along with the immigration officer. They were in my class a total of about 7 minutes for all this. No one got in trouble, no problems as they went from foreign teacher to foreign teacher’s classrooms, all 28 of us. I don’t think it could have gone any smoother. So keep in mind, if you are legally doing what you are supposed to be doing, you won’t have problems.” 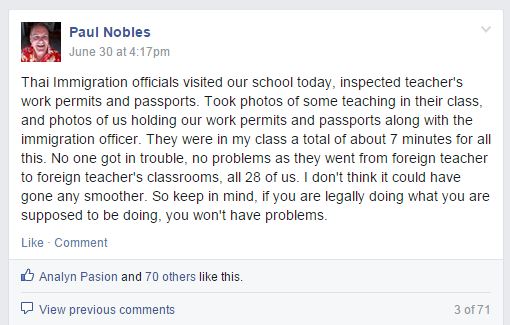