Have you ever experienced dining in a restaurant with your family or group of friends and then suddenly you were asked to lead the prayer? Out of courtesy you did pray but rather in a soft voice that only you could actually hear.

Well, here is a different story of how someone’s loud prayer became a family’s pass to a free dinner. Karl Alain Arante narrated on Facebook how his family got blessed with a free dinner “for not being ashamed of their faith”.

In his post, Arante narrated how his wife uttered a long prayer with a loud voice while dining in a restaurant together with their big family. He even joked, “Why is it too long?” Unknowingly, two foreigners who were also eating at the same restaurant were quietly observing them. Perhaps impressed with their expression of faith, the foreigners paid the family’s PHP 3,393 bill.

GOD BLESSED OUR DINNER TONIGHT!!!! We were so happy for a free dinner..
Me, my wife and my mom were deciding so hard on what to order on meals from the menu so we could save. Ang dami kasi namin. And suddenly came up with a meal that would let us save for about 500 pesos.. When our orders were served on the table, we asked my wife to lead the prayer aloud so the persons from the other edge of the table could hear the prayer.

My wife thanked God for a lot of things na napahaba yung prayer nya. I was thinking, gutom na ako!!! Ok na yan!!! And after she prayed, I told her, “Why is it too long??” with a joking tone.. Haha my wife just answered “I was just thankful”.. Then we continued and enjoyed the meal.. When I saw a man (foreigner) going to 1 of the supervisor near the cashier and I said to my wife, mag babayad siya e bakit siya talaga yung pumunta sa cashier?? My wife just answered, baka hindi sya pinapansin ng waiter.. When the man came back to his table, I realized, the waiters and supervisors were smiling sabay tingin sa amin habang kumakain.. And I just said na parang weird yata to ah.. Both foreigners already leave their table behind us habang kumakain pa kami.. And all the staff from the restaurant were thanking them so hard with a big smile (not a regular thank you).. Weird na talaga..

After we ate, my mom asked the waiter for the bill, the waiter whispered that our bill were already paid by the two foreigners behind us leaving a message, ” ROMANS 1:16 “THANK YOU FOR NOT BEING ASHAMED OF YOUR FAITH” My mom quickly said, “THANK YOU LORD”.. HUMANITY restored by God.. God bless those two people.. We were truly inspired!!!
I will never ever complain for a long prayer.. That was a joke though, haha..

PRAY as loud as we can so people could hear and be inspired.. Thank you.. 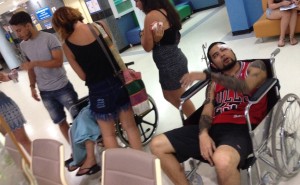 One dead, 12 others injured in Hua Hin twin bombings 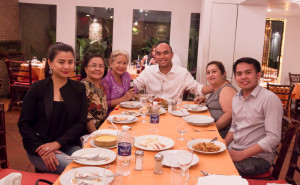 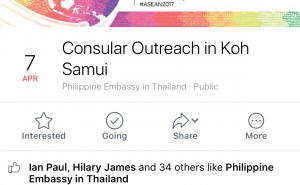