Presidential and vice-presidential tandem Davao City Mayor Rodrigo Duterte and Senator Alan Peter Cayetano warned the criminals and the corrupt that 2016 could be their last Christmas once the two assumed the highest positions in the country if elected in the May 2016 elections.

“Huling Christmas na ito ng mga kurakot at kriminal. Sa susunod na taon, magpapasko silang lahat sa bilangguan. Hindi namin hahayaan na maghari ang katiwalian at kriminalidad sa ating bansa (This is the last Christmas for the corrupt and the criminals. Next year they will all celebrate Christmas in jail. We will not allow corruption and criminality in our country),” Duterte and Cayetano said in a statement.

Cayetano said that he and Duterte would “immediately work towards stamping out criminality, illegal drug trafficking, and corruption during their first year in service” as soon as elected.

Their priority should they win is to run after the criminals, and to make the communities safe. They promised to bring down the national crime rate by half within one year through an “intensified and aggressive” national anti-crime campaign targeting the country’s identified crime spots.

“Kayong mga nagpapahirap sa mga Pilipino, kung ayaw ninyong huminto at patuloy pa rin ang inyong karahasan, ito na ang huli ninyong Merry Christmas (To those who are causing the hardships of Filipinos, if you will not stop and violence continues, this will be your last Merry Christmas),” Duterte said in the 30-second video.

The video which is about fighting crime and corruption has brought Duterte more closer to his supporters. Many consider his “iron-fist” strategy as the best cure for the corruption in the country.

Some netizens, however, suggested that Mayor Duterte should fulfill his statement first to the criminals in his city of Davao citing that after many years of being the mayor a lot of criminals are still enjoying their “last Christmas” in his city year by year. 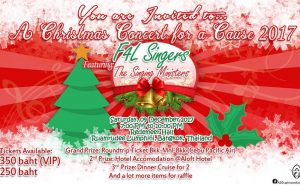 F4L Singers to hold concert for a cause in Bangkok