“The dialogue or meeting will focus on developing strength and unity for Filipino Community and opening up communication between FILCOM leaders and the Consulate,” said on the announcement posted on the Honorary Consulate’s Facebook page.

In a phone interview with PinoyThaiyo, the Honorary Consul also reiterated the importance of having Filipino communities to join in local community activities. He said doing so would help promote their existence. He also mentioned the importance of raising issues or problems as a community instead of doing it individually.

The Honorary Consulate has consular jurisdictions over nine provinces in the North of Thailand. These include the provinces of Chiang Mai, Chiang Rai, Lampang, Lamphun, Mae Hong Son, Nan, Phayao, Phrae, and Uttaradit.

Here’s the announcement on the Honorary Consulate’s Facebook page:

We are planning a dialogue/meeting with FILCOM leaders from the 9 provinces (Chiangmai, Chiangrai, Lampang, Lamphun, Phayao, Phrae, Mae Hong Son, Nan and Uttaradit) under our consular jurisdiction. The dialogue/meeting will be focusing on developing strength and unity for FILCOM and open up communication between FILCOM leaders and the consulate. Tentatively, the dialogue/meeting will be over lunch on Saturday, March 19th. Since we still are lacking contacts with FILCOM leaders particularly from Chiangrai, Mae Hong Son, Phrae and Uttaradit; we would highly appreciate if their respective leaders will contact us by calling the consulate at (053) 351 278 or preferably sending us an email introducing yourself at ChiangmaiHCP@outlook.com. Other FILCOM leaders or those who are keen to assist in developing FILCOM’s strength and unity in the 9 provinces who have not identified themselves with the consulate are also welcome to establish your contact with the consulate.

Meanwhile, the Office of the Honorary Consul offers the following services:

For more details about the Philippine Consulate in Chiang Mai, you may contact the following: 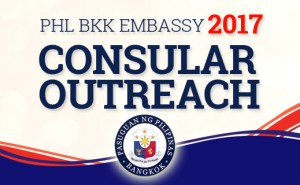 Hatyai, Rayong among 9 provinces to be visited by PHL embassy for consular outreach in 2017 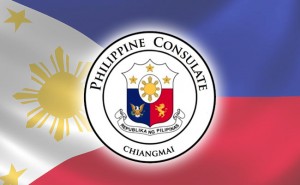