“Living in the Philippines were the best years of my life,” said Mr. Natapanu Nopakun at the beginning of an exclusive interview with PinoyThaiyo on Wednesday, August 19.

Without a doubt, Mr Natapanu Nopakun is a popular and towering figure in the expat communities who have been glued to their gadgets watching his daily news briefing on COVID-19 situation in Thailand. Aside from being the Deputy Spokesperson of Thailand’s Ministry of Foreign Affairs, Khun Natapanu is Deputy Director General of the Department of Information.

But for Filipinos living in Thailand, he is not just a mere source of information. Khun Natapanu is a beacon of pride, hope, joy and dignity among Filipinos in the Kingdom.

Thailand has held the Philippines as an important fellow member of the ASEAN family, united by our common values and interests, and our long-standing bilateral relationship. Tourism in both countries offers vibrant and diverse experiences, unique to one another. Despite Thailand’s relaxation of control measures due to our relative success in containing COVID-19, certain restrictions on international arrivals into Thailand are still in place. This is due to the overall situation around the world, which has not yet improved. Therefore, for the time being, Thailand’s main focus has been only on domestic tourism.

Khun Natapanu lived in the Philippines with his family for almost eight years, from 1986 right after the martial law until 1993. His father was the Deputy Chief of Mission at the Royal Thai Embassy in Manila back then. Arriving in Manila at a fresh age of 12, he enrolled at Colegio De San Agustin then later went to De La Salle St Benilde where he took up Political Science.

Transitioning and adjusting to his new life in the Philippines became natural to Khun Natapanu. He shared how he likes Filipino culture being more open than that of Thailand. Despite the language barrier, he expressed himself really well and even joined in his university’s extracurricular activities. He was once the vice president of the student organization for expat students.

He also confessed that he missed the happy-go-lucky character of Filipinos which according to him were always fun-loving, enjoying singing and lively gathering.

Khun Natapanu also shared some of his pinoy favorites such as food, music, places and unforgettable experiences.

And surprisingly he said that he actually enjoys Filipino food more than Thai food because it’s not spicy. He specifically likes adobo, pandesal, hipon and lechon among many others.

After he had talked of his memorable life experiences, we moved to more nitty gritty topics such as COVID-19, visa amnesty, Thairath’s Covid Land tag on the Philippines, and Filipino teachers in Thailand.

Watch this video by Mark Lanzuela of Markchipelago to know more about Khun Natapanu.

This interview is a collaboration of PinoyThaiyo with pinoy vloggers Mark Lanzuela and Campers Creed. 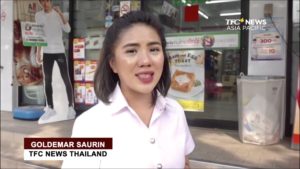 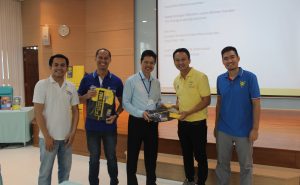 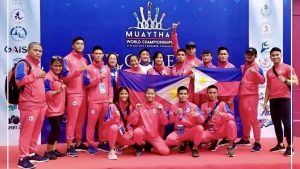