Boredom is not a joke. This Covid-19 pandemic has brought people to situations where we do what we do not usually do while being lockdown.

While some of us are learning new skills such as playing the piano, knitting, cooking and baking, a 38-year-old Thai man had a unique way of killing boredom which eventually led to one of the unforgettable experiences of his life.

We do not know if he got the idea from the word “lockdown”, but instead of doing Tiktok to find new excitement in life, he put a pad lock in his penis for a reason that he only could answer.

When he was about to free up his manhood he realized that he had lost the key. It was probably the most precious thing in his life during those “search operations”.

Finally, a literal operation needs to be done immediately, else his glorious days could be over. With the help of his mom, they sought for medical rescue.

The doctors spent 30 minutes removing the padlock using an electric cutter, as well as a small sheet of metal to protect him.

The man was then given antibiotics to help with the infection, but doctors said his manhood would never be the same. His private part has been left permanently disfigured after being stuck in a padlock for two weeks.

His mom told local media that her son has no girlfriend and is a private person.

“He has been staying at home a lot during the pandemic because he is worried about going out. He told me he did this because he was bored and he liked putting his ‘thing’ through small holes. I was angry at him for embarrassing me like this and I told him not to do it again,” mom said.

How far can boredom take you? 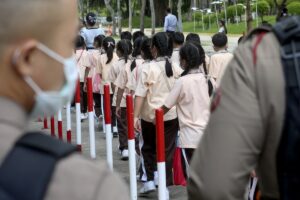