Authorities in Bangkok, Nonthaburi and Pathum Thani have been told to brace for possible flooding after the Royal Irrigation Department decided to increase the discharge rate of the Chao Phraya Dam in Chai Nat in anticipation of more heavy rain.

Thanakorn Tantikul, director of the Ayutthaya irrigation project, said the decision was taken to prevent floods in the northern part of the country, as a monsoon trough makes its way down the length of the country towards the Central Plains and upper South.

He said provinces downstream of Chai Nat have been advised to prepare for a possible surge of water from the dam, which may cause floods in low-lying areas.

Separately on Monday, Prime Minister Prayut Chan-o-cha posted on his Facebook page, saying while the intense downpours brought on by tropical depression Dianmu have begun to recede, heavy rain was still reported in isolated pockets, thus the risk of flash floods and/or landslides remained high.

“The government is doing its best to assist all people. Plans are also being prepared to prevent floods in the lower parts of the country, including Bangkok and its adjacent provinces,” Gen Prayut said.

He said the Department of Disaster Prevention and Mitigation has been instructed to come up with a plan to deal with the nation’s flooding issues. The department was also instructed to dispatch officials and equipment — such as water pumps and rescue boats — to help those affected by floods.

Meanwhile, Bangkok governor Aswin Kwanmuang posted on Facebook saying that the Thai Meteorological Department (TMD) has warned of intense showers across the country until Thursday.

Some floods reported in the capital may have been caused be the rising water levels along the Chao Phraya River, compounded by the heavy rain brought on by tropical depression Dianmu, which caused around 2,500 cubic metres per second of rain to flow through the dam in Chai Nat. 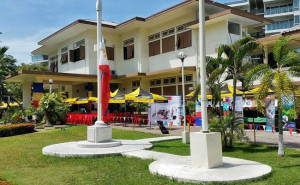